Here are my predictions for tomorrows announcements.

THE KIDS ARE ALL RIGHT

ANNETTE BENING – THE KIDS ARE ALL RIGHT

YOU HAVEN’T SEEN THE LAST OF ME – BURLESQUE (CHER)

the lazy side of the award season……

The Dec/Jan/Feb film season in Australia always has me abuzz. It is award season in the U.S. and we in Oz usually have the contenders on our screens before the crucial Academy Award date.

This year has me excited at the contenders yet to see, and the ones I have seen.

My only complaint is the so-called “gravy train” or “band-wagon”. The same highly acclaimed and awarded films turn up everywhere. While I understand that the film critics band together, it really annoys me that the individual guilds also turn up with the same bunch of nominees.

In all honesty, surely in a year of so many films released, can u believe that the top best films also have the same top designers, and composers, and cinematographers?

A film can have a fabulous script and great performances but an average design or score, also a film with a bad script and direction and so-so cast can have extraordinary design or visuals. Yet they all seem to turn up in the same awards.

I remember years ago, with the Academy Award nominations there was always a few outsiders in the design or cinematography categories that would be recognized but no chance in the film, or direction or screenplay catergories, that way you might seek out the visually talented nominees. I could cite examples but then this post will go on, and i don’t have the time to detail (sorry bout that).

This year it seems in all the individual guild awards the same group of nominees appear. laziness perhaps?  or not even have seen the films upfront ?(hope not).

I wish there were a few left of field nominees out there. Guess there will be at least one or two when the Oscars are announced.

No chance at a best picture nomination, or for direction, acting, but it sure had superbly detailed production design…

The set comprised of a TV studio and the production offices, set in a basement, it felt underground. The apartment of the TV anchor/legend portrayed by Harrison Ford, not seen in great detail, darkly lit, but it screamed of wealth, success, travel etc….totally believable for the character……

the Art Directors guild failed to recognise 😦 beats me

for those who like really good production design, I think you should check it out…in my own opinion!

Time to give a little bit of Oscar contender attention.

Some movies are emerging as front-runners and some are sitting on the sidelines. Some are yet to be seen but the trailers have created interest.

Of course now that there are 10 Best Picture nominations it opens up the field a bit.

But really it is the films that also pick up director and screenplay noms that are to be taken seriously.

David Fincher’s film about the creation of Facebook. The film has had excellent reviews.  It has an Aaron Sorkin script that harks back to the 70’s dialogue driven films, and it is doing very well at the box office – it is a shoo in.

The acclaimed animation from Pixar has such a great script, stellar reviews and a huge box-office take, it will be hard to ignore. It will win best animation but also should get a best pic nod too.

Danny Boyle’s first film since his Oscar winner “Slumdog Millionaire”. The true story of mountain climber Aron Ralston who, after being trapped under a boulder for 5 days, cuts off his own arm to survive. It has had excellent reviews and James Franco should be up for an actor nomination – long overdue.

Christopher Nolan’s mega hit film both popular with audiences and critics. It can’t be ignored with 10 slots to fill. It is an intelligent blockbuster film – how often does that happen? Everytime Chris Nolan helms a film I guess! The Academy will want to amend his much talked about lock out with “The Dark Knight” a couple of years back – some say the reason the list has been expanded from 5 to 10.

Unseen but with a terrific trailer, the new film by Oscar darlings – The Coen Bros is generating buzz. It is a remake of the 1969 western that starred John Wayne. Jeff Bridges takes on the role of Rooster Cogburn so he should expect another nom after his win last year. Apparently this version follows the novel it is based on more closely than the previous film.

This years “Blind Side”? A film about a racehorse that wins the American triple crown. Diane Lane stars as the horses owner. This kind of feel-good movie always does well with the Academy, even if the critics are lukewarm. 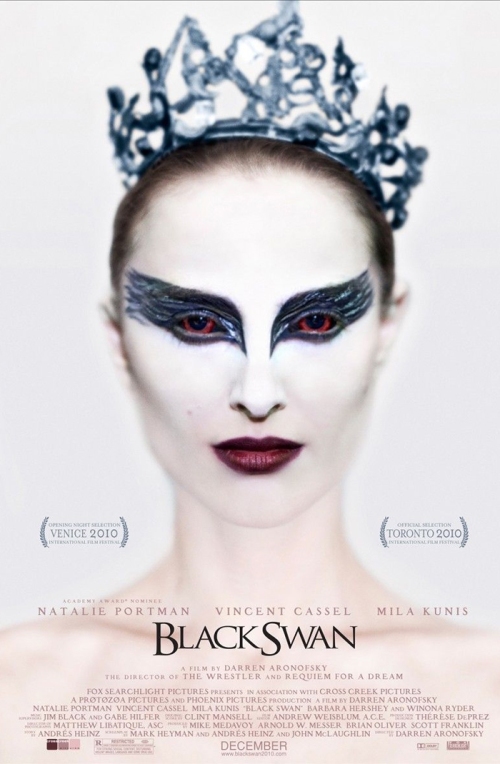 Directed by Darren Aronofsky who won favour with the Academy a few years back with “The Wrestler”. This psychological thriller set in the tough world of ballet stars Natalie Portman who has the critics raving. It could be a bit too dark.

A critical hit and respectable box-office earner over the US summer, this little indie film should fill the “Little Miss Sunshine” slot. Annette Bening should also be recognised. It’s one of my faves so far this year.

Photo courtesy of The Weinstein group

A hit at Venice and Toronto film festival. It could be this years “The Queen”. The critics and audiences seem to love it. Colin Firth & Geoffrey Rush look likely to nab a nom each.

British director Mike Leigh’s latest, another kitchen sink comedy/drama – The Academy love him and he is yet to win. He has a couple of wonderful actresses Leslie Manville & Ruth Sheen who could join other previous ‘Leigh’ ladies on the Oscar trail.

Of course there are a lot more not on this preliminary list. As it develops I will update. In further posts I will look at other categories.